Stephen Wampler was born with severe Cerebral Palsy and uses a power chair for mobility, but it is truly amazing how fortunate he feels about his life and wouldn’t change it for anything! At nine years old, his parents enrolled him in an annual wilderness camp in the High Sierras where he fished, hiked, played in the lake and slept under the stars. His disability paled into insignificance. He learned He could do anything he set his mind to and it became his favorite place on earth.

Ten years and hundred’s of happy ‘Wampler Kids’ later, Stephen Wampler’s quest continues to champion young adventurers by directly funding these life-changing programs. None of this, of course, is possible without your generosity and I hope I have inspired you to action by including us in your giving. Churchill once wrote, ‘You make a living by what you get, but you make a life by what you give.’ 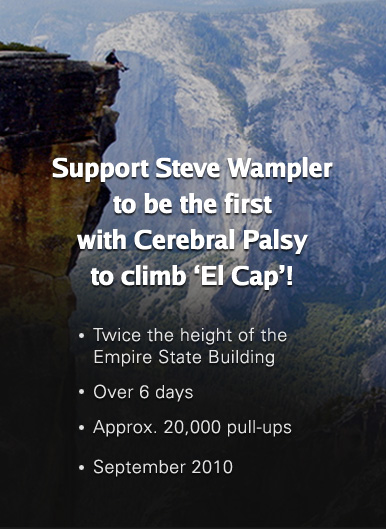 This is it, the BIG one!

Steve’s extreme quest to be the first with Cerebral Palsy to climb El Capitan in Yosemite will mark an achievement of massive proportions. His will power, athleticism and sheer guts, is something for us all to admire, irrespective of his disabilities for this gargantuan task.

Sleeping six nights suspended from a face of granite, Steve will need an unthinkable 20,000 pull-ups to conquer the vertical face that’s twice the height of the Empire State Building!

Steve’s endurance training, mindset and personal commitment is typical of the character of a man dedicated to his Foundation’s goal for funding challenging programs to enrich the lives of kids with physical disabilities.

He is an iconic role model and has moved individuals and corporations alike to ‘Rock On’ and make a real difference.

Learn more, and how you can support this amazing man on his quest! Thank you! KS